How do I set up and use my upgraded recording equipment?

Building a personal studio can be very expensive, and some of us may not have that type of luxury. That is why handy and durable recording equipment is a podcaster’s best friend.

We’re fortunate that these days, advanced technology has made recording more accessible and affordable. The Zoom H6 recording device is a versatile portable recorder, and this is a little tour of the equipment and the case it comes in.

I'm going to give you a little tour of the equipment that I'm sending you. It’s going to be two episodes. One is where I’m going to tell you about the equipment and the case and whatever it is and another episode to teach you how to use it. This is the case. It's a pelican case, which is bombproof. It's going to be good for you to take it on the road. It's waterproof, very durable, and it can be thrown around. You don't have to worry about it. It also has some places where you could throw a padlock in if you want to secure it if you were going to check it on the plane or something. Keep that in mind. It has these two latches to open it and then inside is your equipment. There's a manual for your recording device and a little warranty for this case. You don't always have to leave that in here but I'm going to give it to you that way. What you have is your recording device. It's called a Zoom H6. Then you have two accessories for it. This is a microphone that snaps onto the top of the Zoom device and you would use this if you wanted to record people on the field, so you didn't have to carry mics around. You can put this piece on top of it and you can just hold it between you and the person you are recording because this mic would read them and this mic would read you.

I don't recommend that a lot for podcasting. If you're going to do a few interviews on the sidelines for some reason or somewhere where you can't have the cords and the regular microphones, you can use that. There's another microphone that snaps on the top that's a more single omnidirectional microphone. You won't have a whole lot of use for it but it comes with it. We've included it here for you. Underneath the Zoom, the recorder is a USB cable, but it's meant for plugging this device into power. There are four double-A batteries already installed in it and it will run on battery no problem. If you were going to be in one place for a long period of time, you plug this cord into the port and it would go into any USB AC adapter to plug it into a wall and it would power off of that. That chord is right below. We have your microphones and stands. If you were out on the sidelines and there's a lot of wind, this foam is made to go over this microphone. It's like a windscreen. You may not have a lot of use for this again but it's in there. It’s going to snap on top of it. If you had a lot of wind, this would be a good thing to use. I stuffed it in this little compartment where your microphone stands are going to go because there was room for it there.

The Zoom H6 is ideal to take on the road. It’s a good rugged case.

Here, what we have is where your microphones go and your microphone stands. There's only one microphone and one stand because I sent you already one of these microphones. You have one and I got you a second one with this new set of equipment. You can see your identity on your microphone. It's something we do for customers with their mics once they have their cover art. I thought you'd like it. I made you another one for the microphone you have. There's a notch here on the bottom and you'll see on your microphone, that there's a switch. When you put it on, make sure you line up that notch with the switch side and all you're going to do is put this in and slide it right on up. It is shaped to match your microphone and I already have some museum wax. It will stick it to your microphone. I do that because it's not permanent. It'll stick there, but it's not permanent. When you get your other mic line up the switch with the notch, put them on, and slide it up. Once you slide it up, you can just pull it tight and jam it right up in there and it'll stick until you want to remove it someday but it'll stick. Once you do that, your mic will fit well in this compartment that I created here. You have your spot for both your microphones. 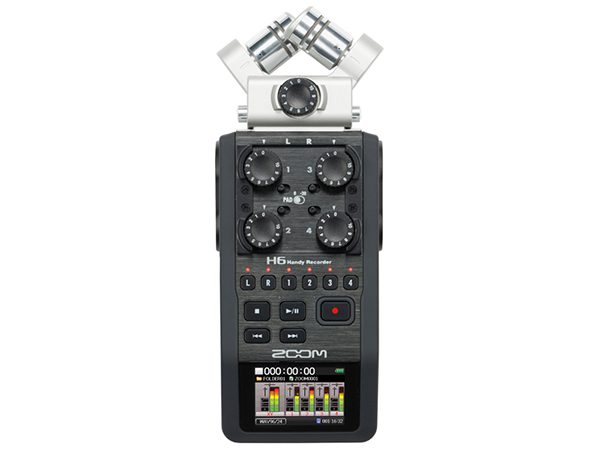 The Zoom H6 has a microphone that snaps onto the top of the device. You don’t have to carry mics around if you wanted to record people on the field.

Underneath each microphone position is the microphone cable that connects it from this large round port with the little three connectors. That's where this cord goes and then it goes into one of these ports on the side of the Zoom device. It can take up to four. That cord is underneath each microphone position. In the middle are the little stands for the microphone if you're going to use them on a table. You’ve probably already done this with the one I sent you, but you can use that stand to hold it on a table. I left enough room here though for your stand to go in so they will nest together. Your other standard, if you fold it flat and turn it the other way, they both fit right down easily and then you have enough room to put that foam piece, so you don't lose it.

Once you get your other microphones set up, put your other stand in there and you're all set. The only other cables are right here. I had extra so I'm sending you two in here. This is for connecting the microphone to your computer so that you have those in for when you do that. That is a little guided tour of the equipment and your box. This is going to be ideal for taking it on the road. It’s a good rugged case. I thought that would be best for you. I also do this for other clients who need this device because there is a lot of expensive equipment. it’s going to take care of it. Thanks so much. I'll come back and I'll show you how to use that recorder.